Tube: how to bend a straight and industrial semifinished product

Tube bending is a process to create curves on thin-walled tubes also. It occurs on folding machines that can be fully automated and make bends in all directions, even with variable radius. This technology includes several variants. 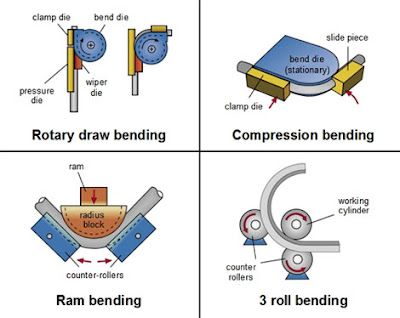 Rotary Draw Bending
When rotary draw bending is applied, the tube is fastened between the bend die and the clamp die. The rotation of both tools around the bending axis bends the tube to the radius of the bend die. The pressure die (slide piece) serves the purpose of receiving the radial stress, which is generated during the forming process, and supports the straight tube end from outside. If a mandrel and wiper die are additionally applied (mandrel bending), a high quality work piece can be achieved even with thin-walled pipes and tight bending radii.
Compression Bending
It is similar to rotary draw bending. This bending method is carried out with a sliding carriage and a stationary bend die, between which the tube is clamped. The sliding carriage, which rotates around the radius block, bends the tube to the radius of the bend die.
Ram Bending (Press Bending)
When ram bending is applied, a radiused bending tool is pressed against two counter-rollers, either manually or by means of hydraulics. This motion forces the tube inserted between the radius block and the counter-rollers to bend around the radius. The tube cannot be supported from within, therefore this method is suitable for thick-walled tubes and large bending radii only.
3-roll Bending
This process is also used for producing work pieces with large bending radii. The method is similar to the ram bending method, but the working cylinder and the two stationary counter-rollers rotate, thus forming the bend
If you want to see a tube bending click here
Pubblicato da Straight & Curved a 11:50