The arch is the first curved element that appears in the history of architecture, invented by the Etruscans and then taken over by the Romans. It will become the key figure in the Gothic style (as pointed arch). In art and architecture in the curved line appears in moments of crisis and rupture, in contrast to the polished mastery of the straight line: in the baroque wants to express rebellion against the traditional rules of Renaissance straight perspective; in  the expressionism appears as a protest against the order geometry of rationalism, as well as Wright's organic architecture. At the same Aalto and Saarinen use enveloping curves in critical opposition to the International Style of Le Corbusier.
In architecture, it is worth mentioning the use of curved lines by the Danish architect Jorn Utzon, who in the wake of organic architecture of Asplund and Aalto designed the Sydney Opera House, a project of great complexity. Watch the technique and the clean lines of design, Utzon finds its most effective means of communication in the curved line.
Finally, may be sued Oscar Niemeyer, one of the greatest living architects who chose the curved line and organic as a key element of its architectural language. 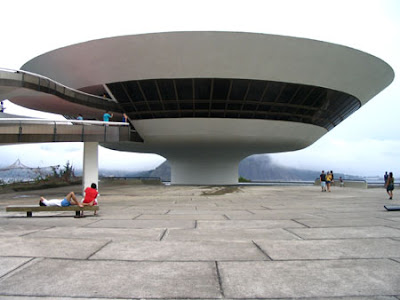 
"It's not the right angle that attracts me. Not even the straight, harsh, inflexible line created by man. What attracts me is the curved line, free and sensual. The curved line that I find in the mountains of my country, in the sinuous course of its rivers, in the clouds of heaven, in the body of his beloved. The whole universe is made of curves. The curved universe of Einstein ......"
(Oscar Niemeyer)
Pubblicato da Straight & Curved a 09:26