"Round sky and square earth" is a basic concept in the traditional of ancient Chinese geography.  It appeared at least two thousand years ago and has influenced Chinese geography significantly - both for good and for ill.  As an academic subject in China, the history of geographical thought is new.  It has become "the center of geographical history" (Yang 1989, p. 7; Wang 1982, p.4).
From Wikipedia-
Chinese thought on the form of the Earth remained almost unchanged from early times until the first contacts with modern science through the medium of Jesuit missionaries in the seventeenth century.  While the heaven were variously described as being like an umbrella covering the Earth (the Kai Tian theory), or like a sphere surrounding it (the Hun Tian theory), or as being without substance while the heavenly bodies float freely (the Hsuan yeh theory), the Earth was at all times flat, although perhaps bulging up slightly.
http://en.wikipedia.org/wiki/Flat_Earth
Examples
The ancient Chinese coins 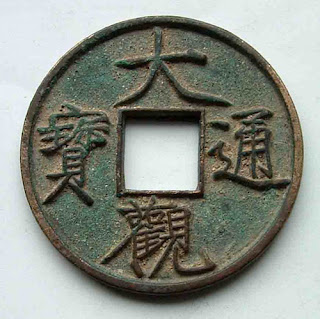 The shape of the coins embodied the concept of "Round sky and square earth".
You can find the interesting information about the history of  Chinese coins here http://chinesecoins.lyq.dk/
Examples
Shanghai Museum

The building has a round top and a square base, symbolizing the ancient Chinese perception of the world as "round sky, square earth".
Pubblicato da Straight & Curved a 06:36