An Ode: 阿房宮賦 On the E Pang Palace


“六王畢，四海一。蜀山兀，阿房出。覆壓三百餘里，隔離天日。驪山北構而西折，直走咸陽。二川溶溶，流入宮牆。五步一樓，十步一閣。廊腰縵迴，簷牙高啄。各抱地勢，鉤心鬥角。盤盤焉，囷囷焉，蜂房水渦，矗不知乎幾千萬落。長橋臥波，未雲何龍？複道行空，不霽何虹？高低冥迷，不知西東。歌臺暖響，春光融融。舞殿冷袖，風雨淒淒。一日之內，一宮之間，而氣候不齊……”
Translation:"After the end of the Six Kings the empire bounded by the four seas was unified under a single ruler; and with Shu Shan stripped of its woods, the E Pang Palace appeared. It stretched to more than three hundred li, covering the sun in the sky; and from the north of Li-Shan it meandered to the west, and then made straightway for Hsien Yang. Two rivers flowing gently coursed their way into the palace-walls.
At each five steps there stood a storeyed building, and at each ten steps, there stood a hall, with corridors winding like waving silk, and the projecting eaves turning high up like birds' bills. Each of the structures possessed its vantage of ground; but they were all ingeniously interlocked together, or one set against another. Some were domed, and others were curved. The courts were like so many cells in the beehive; and of the lofty eave-drippings who can tell how many millions they were.
The long bridge is lying upon the waves; how can the dragon come without clouds? The roofed causeway is stretched in the air; how can the rainbow appear without having a clearing-up sky? Both the high and the low are shrouded in the mists, and it is hard to distinguish the east from the west.
When the singing platform was re-echoed with happy songs, it was full of genial warmth of the spring; but when the dancing sleeves became cold in the dancing hall, it was chilling like wind and rain. The climate did remain the same even on the same day and in the same palace!..." >>http://www.59edu.com/novel/shici/201004/17272.html 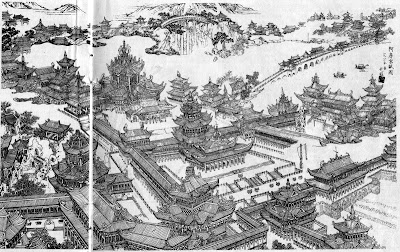 阿房宫赋图
Sima Qian in the Han Dynasty (206 B.C.-220 A.D.) provided a full account in Shiji ("The Records of the Grand Historian") that Xiang Yu, a rebel leader attempting to overthrow the tyranny of Qin, burned the Epang Palace to the ground in a massive uprising.
And the renowned poet Du Mu in the Tang Dynasty (618-907 A.D.) described in detail the splendor of the Epang Palace in his "Epang Palace Fu" (fu is one of the Chinese literary forms akin to poetry).
All these ancient Chinese literary sources for centuries convinced people that a luxurious, imposing, and vigorous Epang Palace did exist and it also saw the transitory brilliance and the expeditious demise of the Qin empire.
>>http://history.cultural-china.com/en/183H6234H12086.html